Do you want to know how to be cast in the studio for your favorite Nick shows?

Are you a huge fan of Nickelodeon and their 2015 / 2016 season lineup of great new kids shows?

Shows like The Thundermans, Every Witch Way, Henry Danger, Max & Shred, 100 Things To Do Before High School, Bella and the Bulldogs , Make It Pop and Nicky, Ricky, Dicky & Dawn?

Well, if you are coming to the Los Angeles area anytime soon you may actually be in luck because many of those shows are now filming and have casting calls out for kids, teens and their families to join the fun as part of the live in studio audience.

Yes, the shows film on a live stage and fans have a chance to see their favorite Nick stars up close. Every season when the shows film, the studios go on the lookout for kids and their families to join the show in the live audience where you get to laugh at all the joke and get taped doing it. OK, it’s not a starring role in a Nickelodeon show… but it is closer than most fans will get. There are free tickets available to the taping and they are offered up on a first come, first serve basis.  Kids, teens and their families who would love to be a part of a Nickelodeon show during filming simply need to request their tickets in advance and attend once they have been cast for the audience roles. The Nick shows film around the Hollywood area and of course those cast for audience would need to provide their own transportation to the set as well as cover the parking… this is Los Angeles and parking can be a serious test of your patience, but once through the traffic and parking gauntlet, you should be on the studio lot and home free to watch your favorite shows.

So how do you get on “Henry Danger“, “The Thunderman’s” or “Nicky, Ricky, Dicky & Dawn“? It’s easy, you simply request some tickets during the shows filming season. There are a few different companies that deal with audience casting of these shows but a popular one is TV Tickets. Different shows film at different times but you can see this link to see what shows are filming and casting audience members now.

So while you most likely will not land the lead role… or any main role in shows like “Henry Danger“… you will get a great chance to see the action as it happens live and hopefully have a great time doing it.

So here is a brief rundown of some of the cool shows you can get cast in the audience for.

The Thundermans is filming now! 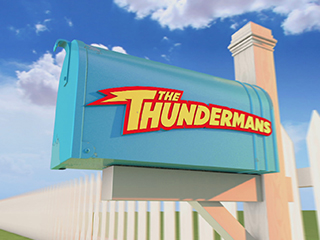 Superheroes are awesome and nothing is more awesome than an entire family of super folks.  Meet the Thundermans, a not-so average family whose #1 concern is trying to keep their super-human quirks under wraps and lead a normal life.

Henry Hart is a 13-year-old boy who lives in the town of Swellview. He lands a part-time job as Kid Danger, a sidekick to the superhero Captain Man. Captain Man told Henry not to tell anybody about his job, so he has to keep it a secret from his best friends Charlotte (who eventually learns his secret) and Jasper, his parents, and his younger sister Piper.

Max & Shred
The series chronicles the hilarious and unlikely friendship between Max Asher (Jonny Gray), a celebrity snowboarder, and Alvin “Shred” Ackerman (Jake Goodman), a science whiz-kid, who become roommates and instant “bros” when Max moves to Colorado to train for the Winter Cup.

The story of 10-year-old quadruplets Nicky, Ricky, Dicky and Dawn, who share nothing in common except their parents and their birthday.

Bella and the Bulldogs

The series follows cheerleader Bella Dawson whose life in Texas takes an unexpected twist when she is recruited to become the new quarterback for her school team, the Bulldogs. At first, the rest of the team didn’t want her as quarterback, but they eventually accept her

So ready to get your few minutes on the set of a hit Nickelodeon series?  See this link to see what shows are filming and to find any casting calls for audience members now. Unfortunately… no one gets paid to attend. This is all on a volunteer basis and those cast for audience work will get to do it just for the fun of the experience.