TV show now holding auditions for babies! get your child on the ABC hit ‘Bet On Your Baby” and maybe win big.

How well do you know your baby? Would you bet on him or her?

ABC’s Bet on Your Baby is having a casting call for a new season of the very unique game show which puts parents in the positions to bet on their babies all in hopes of winning $50,000.

Does your child need a college fund? If so, you and the baby can tryout for the show!

Bet on Your Baby premiered last year and in January of 2014 the network announced that the show is coming back for a second season and ordered 8 episodes of the show. Casting for those episodes just began and casting directors would like to audition babies and toddlers that are between 2 and 4 years old. Currently they are holding auditions in the Los Angeles area for parents and their kids. The show is an hour long and puts parents and children apart. The parents play the gameshow on stage while their toddlers are kept busy in an area off stage. The toddlers will complete some tasks or at least try to while the parents try to guess at the outcome of those challenges in front of a live audience in a game show setting. 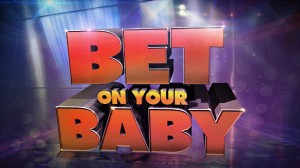 ‘Bet on Your Baby‘ is hosted by Melissa Peterman and every hour long episode will feature five families trying to guess what their babies will do without them around. The families have the potential to walk away with a huge prize of $50,000 going towards a scholarship for their child’s education.

The family Game show is created by Craig Armstrong, Rick Ringbakk, and Ben Silverman. It is produced in the US by Electus and will most likely air the new season in April 2014.

Proud parent’s here is your chance to get your baby on TV, as well as yourselves. How well do you think you know your child or what they will do. Put it to the test and maybe you can get cast on ‘Bet On Your Baby’.

CEO, Chris Grant of Electus commented on the show “We are thrilled that ABC has decided to renew “Bet on Your Baby” for a second season,” he also added “This show has continued to build momentum both in the U.S. and around the world, proof that Electus is achieving its mission to create engaging television.” The show also will have versions in other countries which include Australia where it will air on Network Ten, Hong Kong on TVB, Korea, Discovery Channel in Latin America and Poland as well as channels in Asian countries. 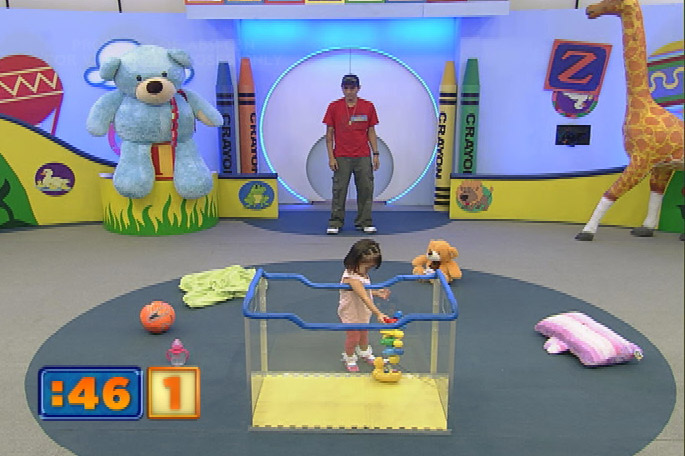 If interested, EMAIL a current photo of your family, names, ages, both parents’ contact info, city and a brief family bio. You can see the flyer below for submission information and additional info about requirements. 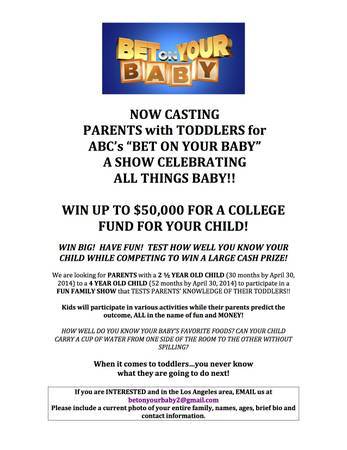 If you have never seen the show, check out this video of a partial episode to see what this show is all about.

Don’t live in L.A. but think you have a adorable kid? You can always enter your toddler in the Baby Gap and Kids Gar photo contest. You can expect to see the new season on ABC coming up this spring.

6 thoughts on “Casting Babies, Toddlers and their parents for ABC ‘Bet On Your Baby’”