Get on the Disney Channel show A.N.T. Farm!

The Disney Channel now has another hit comedy kid / teen sitcom called “A.N.T. Farm”. A.N.T. farm is a series produced by Dan Singer. Dan is well known for being one of the producers and writers on the very popular show “The Suite Life of Zack and Cody” and the Suite Life spin-off “The Suite Life on Deck”. Dan Singer is also the creator of the Disney XD series “Mr. Young”.

A.N.T. Farm from the Disney Channel first aired as a special preview and continued as a regular series on June 17, 2011.

The pilot episode, “TransplANTed” aired after the series finale of The Suite Life on Deck. The first promo piece for A.N.T. Farm was aired during the premiere of Lemonade Mouth.

A.N.T. Farm has a good cast of talented child actors. The Disney Channel show stars China Anne McClain, Sierra McCormick and Jake Short. The three friends all go to Middle School together and are involved in a program called A.N.T. which stands for “Advanced Natural Talents”.

What is interesting about A.N.T. Farm is that the show was actually created around it’s star China Anne McClain. Dan Singer said

“The girl had so much confidence. She can nail a joke. She can sing. She can play instruments. It’s like China was some sort of child prodigy, that’s when it hit me: Why not build a show around a child prodigy?”

Dan Singer admits that he show was first conceived when he, saw China Anne McClain.

Some trivia about the auditions and casting for A.N.T. Farm:
Sierra McCormick was cast after an audition where she continually talked about tigers. Dan Signer stated

“And as I heard her continually talking about tigers, I thought ‘That’s just how Olive would sound.’ Which is how Sierra got that part.”

The main characters in the show are as follows:
Chyna Ann Parks (China Anne McClain) – a music prodigy and gifted girl.

Olive Daphne Doyle (Sierra McCormick) – very smart – a human computer that can remember everything she has ever heard or seen. She plays Chyna’s best buddy in the series.

Lexi Taylor Reed (Stefanie Scott) – the mean girl and antagonist of the school.

Cameron Parks (Carlon Jeffery)- He is Chyna’s brother in the show. He is older and tries to avoid the middle school scene and A.N.T.

A.N.T. Farm is also going to have a soundtrack released. Most of the songs on the soundtrack are performed by China McClain.
The A.N.T. Farm soundtrack is scheduled to be released this month, October 11, 2011.

The A.N.T. Farm record will feature songs by China and other cast members (see list below). There is also a song on the A.N.T. Farm soundtrack called ‘Beautiful’ that will be China McClain and Bruno Mars. The soundtrack will also feature songs by China and her sisters Lauryn and Sierra. The McClain sisters actually have a album coming out in 2012 with Columbia records.

If you want to be like China McClain, get your own Disney Channel series as well as a record deal, you will most likely have to really practice not just your acting, but also your singing, dancing and music. Remember China McClain is the young lady who seems to be able to do it all including playing musical instruments. To get on a Disney Channel show you will also need to impress the casting directors at the audition just like China McClain did with Tyler Perry at his auditions and Dan Singer. 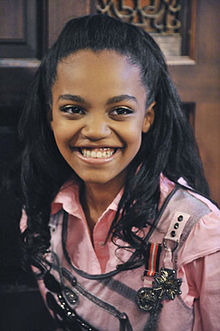 This is not China McClains first TV show. China McClain was in Tyler Perry’s House of Payne where she played Jazmine Payne.

China McClain got her big break as a child singer.She was discovered in 2005 by a music executive who heard her sing and encouraged director Rob Hardy to audition her for his 2005 feature film The Gospel. McClain was only 6 years old when she landed her first role in ‘The Gospel’.

China McClains role on ‘The Gospel’ caught the attention of Tyler Perry who then went on to cast her in his show ‘Tyler Perry’s House of Payne’ as Jazmine Payne.

China has also been in other movies, shows and TV series. She appeared on Hannah Montana, NCIS the movies Hurricane Season, Grown ups and others. She obviously has been to many Disney Channel casting calls.

Other shows China McClain appeared in before getting cast on Disney Channels A.N.T. Farm in 2011 are Dennis The Menace Christmas show, Jimmy Kimmel, Jonas L.A., Wizard’s of Waverly Place, PrankStars and So Random!

Here is the Disney Star of A.N.T. Farm, China McClain talking about how Nick Jonas gave her a guitar