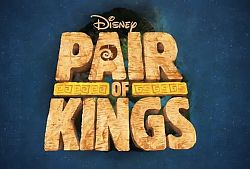 It’s A Laugh Productions has just created its second season of the Disney XD show “Pair of Kings”. The show, when in production will be casting extras and guests for the comedy series.

“Pair of Kings” is about 2 twin brothers. Brady (Mitchel Musso) and Boomer (Doc Shaw), twins that are raised by an aunt and uncle who come to find out that they are heirs to the throne of some island in Polynesia.

The twins relocate to the island and become joint kings. Through this whole process, their lives change dramatically and the twins learn to cope with those changes and the social changes that came along with the move and their new roles.

“Pair of Kings” was created by Dan Cross and David Hoge. Disney XD is part of the Disney Channel network of programs and the show is broadcast in many countries including Spanish language countries, Asia and the UK.

The main characters in ‘A Pair of Kings’ are

There are also supporting actors and guests that appear on the show.

The following companies handle the casting call for ‘Pair of Kings’ as well as other Disney and Disney XD TV shows. If you want to be considered for the show please mail your information to the casting directors below. Please note that extras casting does not take mail submissions and you will need to call Central Casting to find out what to do.